Optimization of ligand density on polymeric nanoparticles (PNPs) is critical for targeting solid tumors.  Recently, one paper published paper prepared fluorescent cyanine 5.5 dye and cyclo(arginine–glycine–aspartic acid–phenylalanine–lysine) ligand-modified polyethylene glycol-poly(lactic-co-glycolic acid) (Cy 5.5-cRGDfK-PEG-PLGA) NPs with different ligand concentrations and investigated their cancer-targeting abilities in vitro and in vivo. The PNPs self-assembled in an aqueous solution as round particles and showed an increase in their average size as a function of cRGDfK concentration. In vitro results revealed a gradual increase in the uptake of NPs in MDA-MB-435 breast cancer cells in a time- and ligand concentration-dependent manner. In vivo, NPs with 6 w/w% cRGDfK concentration showed prolonged uptake by the cancer tissue during the 7-day test period. These results suggest that Cy 5.5-cRGDfK6-PEG-PLGA NPs could serve as valuable drug carriers and diagnostic agents for the clinical treatment and targeting of solid cancers.  Journal of Industrial and Engineering Chemistry.  81, 25 January 2020, Pages 178-184.

Mammalian cells don’t have exterior cell walls for protection, and environmental assaults can easily damage or destroy mammalian cells. Thus, the ability to develop a biomimetic cell wall (BCW) on their plasma membrane as a shield can advance various applications. A recent study published in Nature Communications has synthesized BCW with a framing template and a crosslinked matrix for shielding live mammalian cells. The framing template is a supramolecular DNA structure. The crosslinked matrix is a polyelectrolyte complex made of alginate and Pegylated-polylysine (PLL-MPEG, Nanosoft Polymers). As the entire procedure of BCW synthesis is strictly operated under physiological conditions, BCW-covered mammalian cells can maintain high bioactivity. More importantly, the data show that BCW can shield live mammalian cells from not only physical assaults but also biological assaults. Thus, this study has successfully demonstrated the synthesis of BCW on live mammalian cells with great potential of shielding them from environmental assaults. Nature Communications (2019) 10:2223.

Multifunctional nanocarriers have been widely applied due to their enhanced effect on tumor therapeutics. Nevertheless, owing to the natural immune clearance mechanisms in living bodies, nanocarriers tend to be eliminated during blood circulation, thereby impeding their effective arrival at the tumor sites. In a recently published paper, the authors constructed a synergetic targeted liposome nanocarrier system named SELS functionalized with both a tumor identification ligand (anti-ER (Estrogen Receptor) antibody) and an immune targeting ligand (Self-Peptide (SP)). DSPE-PEG-Mal (Nanosoft Polymers) was used to conjugate targeting ligand. The anti-ER antibody could recognize and bind ER-positive breast cancer tissues in a specific way. SP could activate the CD47-SIRPα immune response, which reduced phagocytosis of the nanoparticles by macrophages. Both the enhanced targeting ability and anti-phagocytosis behavior could improve the tumor uptake of the nanocarriers and prevent their immune clearance in living systems. Therefore, drug-loaded SELS enabled improved tumor imaging and therapeutic performance in living systems.  Journal of Materials Chemistry B, 48(7 ) 1056-1063.  2019. 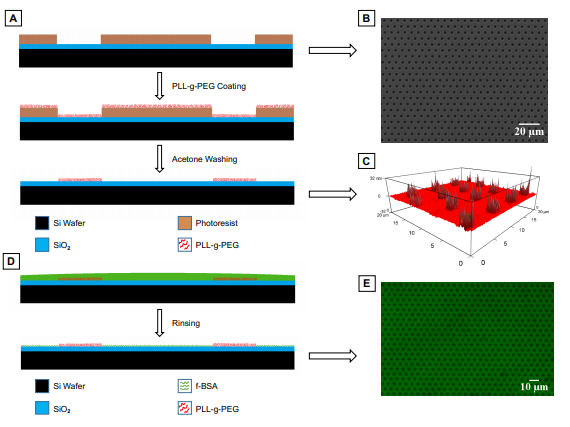 Porous membranes are ubiquitous in cell co-culture and tissue-on-a-chip studies. These materials are predominantly chosen for their semi-permeable and size exclusion properties to restrict or permit transmigration and cell-cell communication.  In a recent study, researchers fabricated micropatterned non-fouling polyethylene glycol (PEG) islands (based on PLL-g-PEI, Nanosoft Polymers)  to mimic pores in order to decouple the effect of surface discontinuity from grip provided by pore wall edges. Similar to porous membranes, they found that the PEG islands hindered fibronectin fibrillogenesis with cells on patterned substrates producing shorter fibrils. Additionally, cell migration speed over micropatterned PEG islands was greater than unpatterned controls, suggesting that disruption of cell-substrate interactions by PEG islands promoted a more dynamic and migratory behavior, similarly to cells
migrating on microporous membranes. Preferred cellular directionality during migration was nearly identical between substrates with identically patterned PEG islands and micropores, further confirming disruption of cell-substrate interactions as a common mechanism behind the cellular responses on these substrates. Interestingly, cell spreading and the magnitude of migration speed was significantly greater on porous membranes compared to PEG islands with identical feature size and spacing, suggesting pore edges enhanced cellular grip. These results provide a more complete picture on how porous membranes affect cells which are grown on them in an increasing number of cellular barrier and co-culture studies. https://www.biorxiv.org/content/early/2019/02/28/563361.full.pdf. 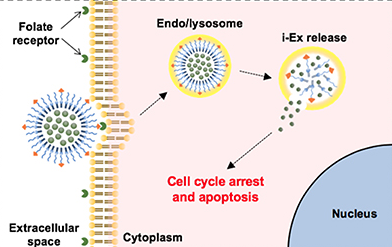 Recently, An patent (US20180369231A1) published by  SNBioScience Inc. has invented a drug delivery system having a double core-shell structure and, specifically, to a double nano-drug delivery system having an inner core-shell containing a poorly soluble camptothecin compound and a water-soluble camptothecin compound inside and an amphiphilic polymer shell, and to a manufacturing method therefor. The double core-shell structured particles manufactured by the present invention form very stable particles and show a mono-distribution of particles before and after freeze-drying. The particles of the present invention show excellent results compared with existing monolayer micelles in animal efficacy tests and pharmacokinetic tests, and do not use a surfactant causing hypersensitivity, and thus the use of the particles of the present invention can provide a pharmaceutical composition or a drug delivery system platform, which are safe for the human body.  NSP’s polymers were used in the formulation. (https://patents.google.com/patent/US20180369231A1/en). 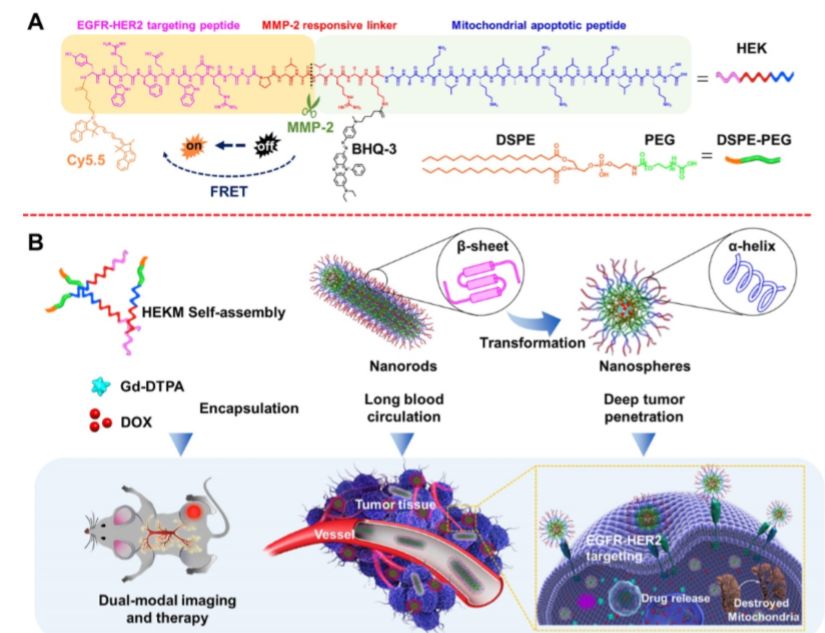 Nanoparticle (NP)-based tumor theranostics have ushered in new opportunities for personalized nanomedicine due to their rational design and functionalization. Through the active-peptide-functionalization,  a research group developed a nanoscale micelles system (named HEKM) which consists of tumor microenvironment-regulated shape-changing with specific recognition abilities for enhanced cellular targeting, internalization and therapy of heterogeneic tumors. As a result, HEKMs could recognize and bind the tumor heterogeneity marker EGFR-HER2 complex, which led to an enhanced tumor targeting effect. In particular, HEKMs could self-assemble into nanorods under normal physiological conditions while transform into nanospheres in the tumor extracellular microenvironment by a sensitive response to matrix metalloproteinase-2 (MMP-2). The nanorods could prolong the blood circulation time while the nanospheres could accelerate tissue penetration in tumors. In vivo dual-modal targeted imaging was realized by FRET-fluorophore conjugation and gadolinium loading in HEKMs. Tumor cell apoptosis was achieved by proapoptotic element integration. The in vitro and in vivo studies both demonstrated that these rationally designed, shape-changing and targeting micelles could achieve maximized drug efficacy and minimum side effects. Theranostics 2019; 9(6): 1728-1740. doi: 10.7150/thno.30915. 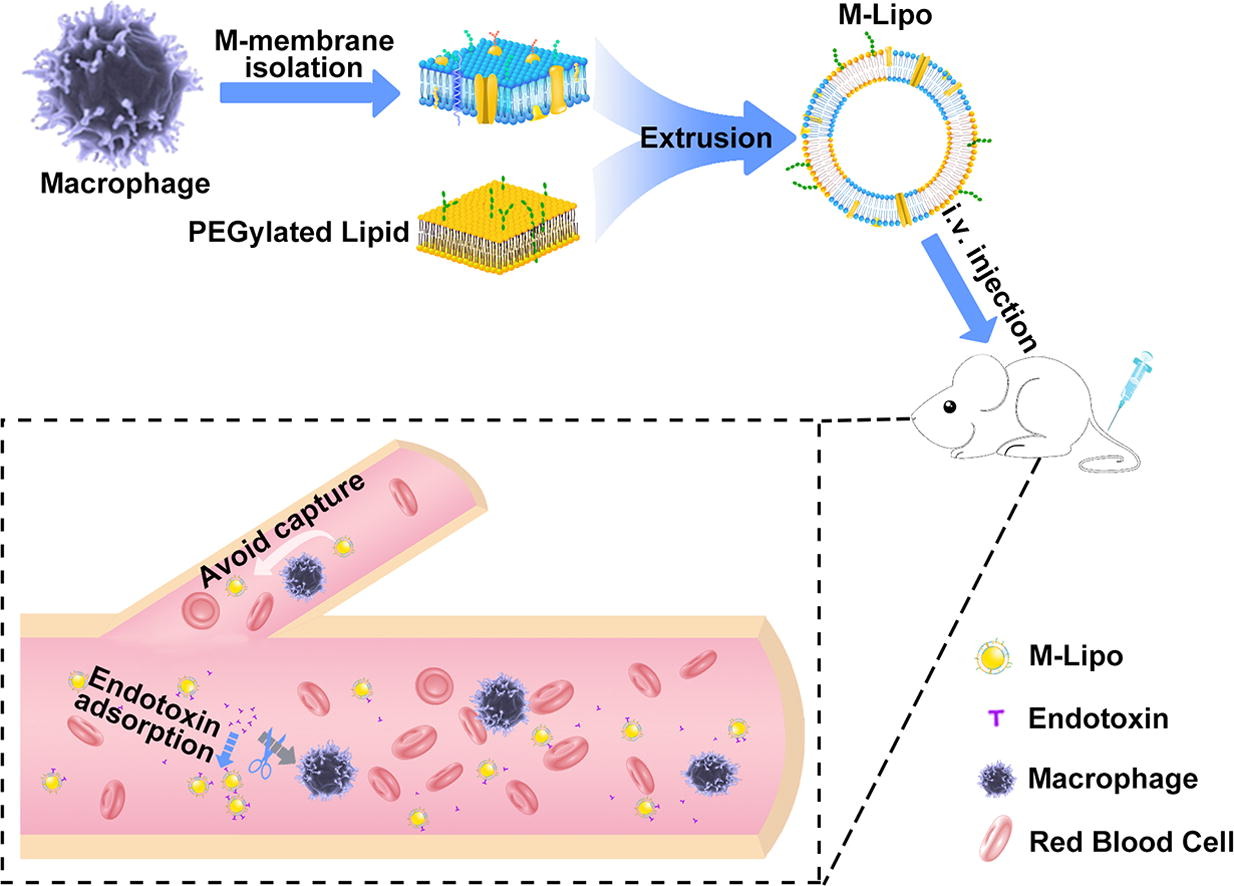 Sepsis is a life-threatening condition resulting from bacterial or fungal infections. Common treatments for sepsis, such as antibiotic therapy, are far from satisfactory. Because endotoxin (LPS) is a major pathogenic factor in sepsis caused by gram-negative bacterial infections, neutralization of LPS is a promising therapeutic target. To effectively eliminate LPS, in a recent study published in  Chemical Engineering Journal, a macrophage-mimetic hybrid liposome (M-Lipo) was developed by fusing a macrophage membrane (M-membrane) with artificial lipids (Nanosoft Polymers). The M-membrane could provide an intrinsic binding site for LPS. The artificial PEGylated lipid could stabilize the natural membrane and prolong the circulation of M-Lipo in the bloodstream. These two membranes could complement one another and extend their biofunction as they were integrated. The results showed that M-Lipo had surface proteins similar to those of macrophages and could substantially adsorb LPS. With the help of the PEGylated lipids (Nanosoft Polymers), M-Lipo presented much better stability than the bare M-membrane vesicle. In addition, the pharmacokinetic results revealed that M-Lipo clearly had longer retention (∼16%) in blood (at 12 h) than the natural M-membrane (∼3.3%). By combining these properties, the hybrid M-Lipo not only reduced the toxicity of LPS in vitro but also protected the mouse against endotoxic shock in vivo. In conclusion, the hybrid liposome M-Lipo has the advantages of both natural membranes and artificial materials, eventually leading to the successful treatment of sepsis. Chemical Engineering Journal (31), 15-25, 2019. 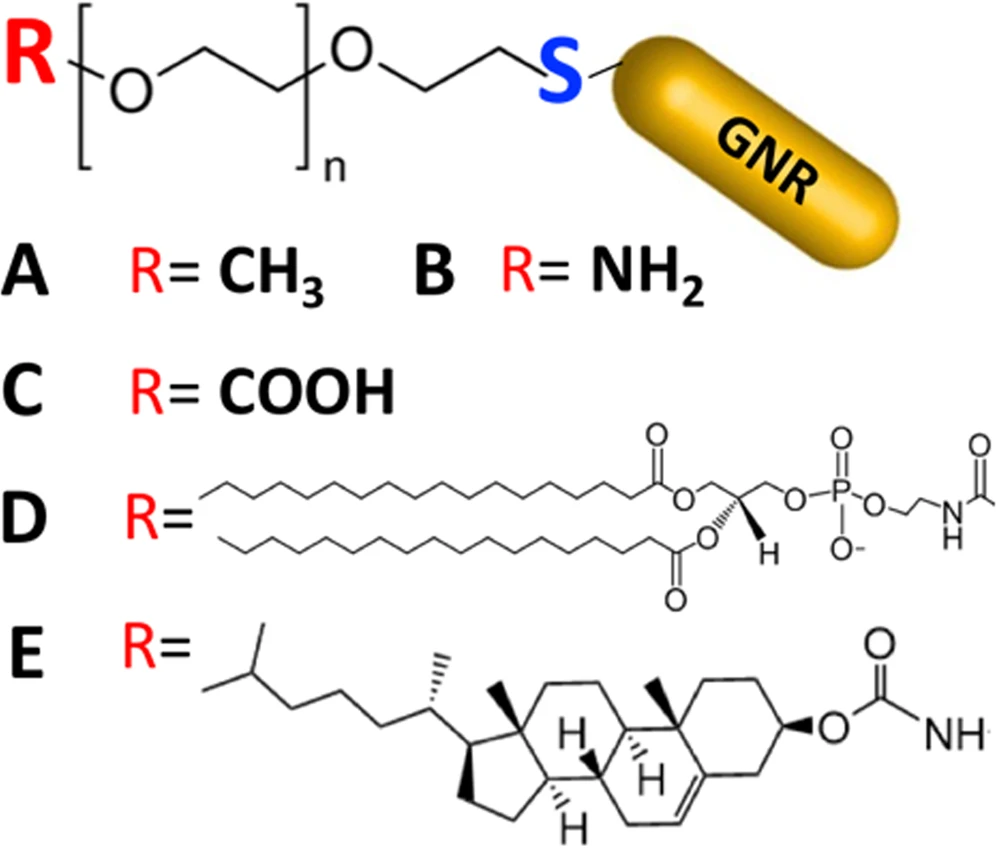 Skin is considered as the ideal site for non-invasive skin therapeutic platforms. In a recent study published in Scientific Reports,  a library of gold nanorods (GNR) decorated with polyethylene glycol-thiol (PEG-SH) containing different functionalities were synthesized and characterized. The results demonstrated that cholesterol-PEG coated GNR were preferentially loaded up in the upper layers of skin (stratum corneum), while phospholipid-PEG coated counterparts were drastically deposited in skin dermis. Neutral methoxy-PEG-coated GNR were distributed in both SC and dermis skin layers, while charged GNR (anionic-carboxylic acid-PEG-GNR and cationic-amine-PEG-GNR) revealed a minimal accumulation into skin. DSPE-PEG-GNR and Chol-PEG-GNR demonstrated antibacterial activities against Staphylococcus aureus (S aureus) at MIC values of 0.011 nM and 0.75 nM, respectively. Photothermal treatment for S. aureus at sub-MIC concentrations resulted in a significant bactericidal effect when using Chol-PEG-GNR but not DSPE-PEG-GNR. Gold-based nanoscale systems have great value as a promising platform for skin diseases therapy. Scientific Reportsvolume 9, Article number: 5796 (2019). 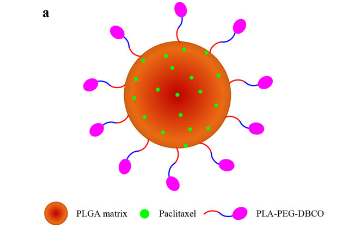 Dectin-1 is a mammalian innate immune receptor in the membrane of some leukocytes that binds as a dimer to beta-glucans found in fungal cell walls, signaling fungal infection. A recent published study developed a Dectin-1 targeted liposomes which can specifically bind to fungal cell walls. The targeted liposomes were used to deliver amphotericin B (AmB).  Using a novel protocol, the researcher coated AmBLLs with Dectin-1’s beta-glucan binding domain to make DEC-AmB-LLs. DEC-AmBLLs bound rapidly, efficiently, and with great strength to Aspergillus fumigatus and to Candida albicans and Cryptococcus neoformans, highly divergent fungal pathogens of global importance. In contrast, untargeted AmB-LLs and bovine serum albumin (BSA)-coated BSA-AmB-LLs showed 200-fold-lower affinity for fungal cells. DEC-AmBLLs reduced the growth and viability of A. fumigatus an order of magnitude more efficiently than untargeted control liposomes delivering the same concentrations of AmB, in essence decreasing the effective dose of AmB. Future efforts will focus on examining pan-antifungal targeted liposomal drugs in animal models of disease. American Society for Microbiology 2019 (4) Issue 1 e00025-19. 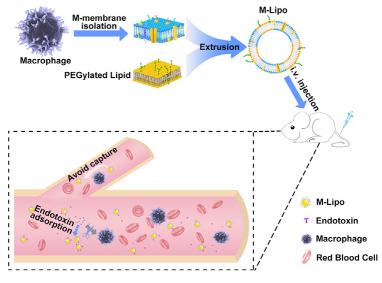 Sepsis is a life-threatening condition resulting from bacterial or fungal infections.  In a recent published, a macrophage-mimetic hybrid liposome (M-Lipo) was developed by fusing a macrophage membrane (M-membrane) with artificial lipids (Nanosoft Polymers). The M-membrane could provide an intrinsic binding site for LPS. The artificial PEGylated lipid could stabilize the natural membrane and prolong the circulation of M-Lipo in the bloodstream. These two membranes could complement one another and extend their biofunction as they were integrated. The results showed that M-Lipo had surface proteins similar to those of macrophages and could substantially adsorb LPS. With the help of the PEGylated lipids (Nanosoft Polymers), M-Lipo presented much better stability than the bare M-membrane vesicle. In addition, the pharmacokinetic results revealed that M-Lipo clearly had longer retention (∼16%) in blood (at 12 h) than the natural M-membrane (∼3.3%). By combining these properties, the hybrid M-Lipo not only reduced the toxicity of LPS in vitro but also protected the mouse against endotoxic shock in vivo. In conclusion, the hybrid liposome M-Lipo has the advantages of both natural membranes and artificial materials, eventually leading to the successful treatment of sepsis. Chemical Engineering Journal (371), 2019, 15-25.

Polymeric micelles have been widely studied and developed for targeted delivery of cytostatic drugs. However, due to heterogeneity of tumor cells, targeting efficiency may be enhanced by using different types of targeting agents on the same drug delivery system. Recently, one study published in Materials Letters developed dual targeted micelles for anticancer drug delivery.  The aim of the study was to obtain and characterize paclitaxel-loaded biodegradable poly(L-lactide)-co-poly(ethylene glycol) (PLA-PEG) micelles functionalized with folic acid and biotin (Nanosoft Polymers). The developed dual targeted micelles show low critical micelle concentration, high loading capacity of paclitaxel and prolonged in vitro drug release. The cytotoxicity of paclitaxel-loaded micelles was confirmed against folate- and biotin-receptor positive OVCAR3 cells, which indicates their usefulness for targeted delivery of cytostatic drug. Materials Letters 241 (2019) 187-189.